I was going to title this in the singular–“My Very Bad Habit“–but I can’t, even in jest, pretend there’s only one.  This is the one of which I’m most ashamed, and therefore (perversely) the one I’m writing about.  I spent some thirty-five years turning up my nose at people who indulged in this same habit, which is maybe why I still tend to refer to it euphemistically in reference to myself.  I’ll say “I’m going to step outside,” or even “I’m going to indulge in my Bad Habit,” never… okay, here it comes…  never “I’m going to smoke.”

When I was a kid, I actually had an allergy to cigarette smoke–probably it’s too bad I outgrew it.  Although as I think about it, I have an “allergy” of sorts to alcohol too (I tend to break out in stripes and handcuffs!) and that didn’t stop me drinking… 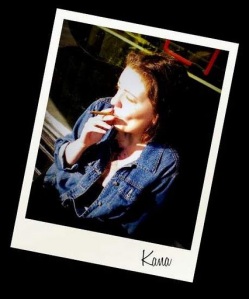 Thirty-five years as a non-smoker, and then I hit A.A.  There’s just one “Smoking” Meeting in town, and wouldn’t you know, that was the Meeting I loved.  I didn’t fit in there, but that was the meeting where I was sure to laugh my ass off, as well as take something home that I needed to hear that day.  Three, four, five times a day I’d have my ass in a seat at the Little Red House, sitting in a cloud of smoke and Healing.  And after a couple months of breathing everyone else’s smoke, I figured finally I’d find something to smoke that I actually liked, and smoke that.  Vanilla Cheyennes, there we go. Less than two bucks a pack, and I like them.  So easily is a Very Bad Habit born.

I know better.  Of course I do–I have a degree in biology, for crying in a bucket.  And an aunt who died horribly of lung cancer (younger than my husband is now) when she’d never smoked in her life.  And for the short term, talking about right now, those consequences weigh on me much less heavily than they should.  As I flippantly remark sometimes, comparing this Very Bad Habit to my previous VERY Bad Habit of vodka, “At least smoking doesn’t turn me stupid.”

Except that it IS stupid, I know this.  Both my mother and my children would take issue with that remark–and the anxiety I cause them with my smoking is what has already led to my cutting back.  Maybe I’ll even quit–although not today.  In the meantime, it’s an odd dynamic when I’m around either of the generations sandwiching me–when I do “step outside” I do my best to do so unobtrusively, because I know it causes them anxiety.  Maybe it’s silly, this “open secret”–just a little bit ago I waited for my mom to go into an appointment before I lit up, then jumped like a guilty teenager when she came back out for something she’d forgotten.  She laughed at my reaction, and reminded me that she does know I smoke…  Yeah, but I just try (impossibly) to be invisible about it.  Writing about it today being an obvious exception, given that my mom does read here…

So…  Why smoke?  I’m not looking to “justify” the habit in writing about it, but to explore it–today I’m asking the question of myself.

Sometimes a smoke is…  a unit of time.  It’s a pre-set number of moments in which I step away from everything, sit alone, breathe deeply, focus my thinking…  or look around me and stop thinking for a minute.  Very often these are the moments when I’m moved to pray.

Occasionally…  a smoke is an excuse.  Sometimes I need a minute to compose myself, and sometimes it’s better to excuse myself outside for a few moments (even against my usual priority of unobtrusively indulging) than to react on my first response.  When I’m upset to tears by seeing the effects on my children of the “parenting” by their other biological parent, for example–better for me to recuse and regroup than badmouth the dad in their hearing.

Often a smoke is a brainstorming session.  When my fingernails go silent on the computer keys, I go light up.  Almost inevitably, I know what I’ll write next (and have some of it phrased out in my head) by the time I come back inside.

And–aside from the obviously physically addictive properties of smoking–there’s the fact of my own addictive personality.  The “functions” of smoking in my life don’t replace how I used drinking, although there are similarities in the approach.  An Addict has rituals associated with an addiction–might be anything from checking the wallet in the morning to assure yourself there’s sufficient cash for the stop at the liquor store after work, to the pouring of the drink, the activities or times of day when a drink would be in hand…  When we cross-addict to other activities, sometimes our rituals cross over too.  A “ritual moment” now isn’t the pouring of a drink, but the flick of a lighter.  In cold weather I have a callus on the side of my thumb because it takes a few flicks to get the thing going, with the spark wheel chafing my thumb.

For a couple years part of my ritual was the lighter itself–a refillable silver flip-top embellished with a cross and a skull, which my stepson bought for me.  It got confiscated at the Lewiston Idaho airport a few months ago–after having made it through half a dozen other (bigger!) airports on other trips, the folks in Lewiston deemed it dangerous and took it.  I haven’t had the heart to replace it, so today I’m using a disposable pink Bic–which I actually won at our regular smoke shop for answering the posted trivia question: “What is a Gallophobic Englishman afraid of?”

Even our smoke-shop is part of the “ritual” aspect of smoking…  Run by a big tattooed Christian biker with a braided beard who goes by Hyster (like the forklift), who hugs and kisses us both–and who pledged, after our alcoholic relapse last year, that he’ll not sell alcohol to either of us.  A selfless promise, given that he knows full well we could buy somewhere else if we were going to buy–but I have faith that he’d hold to it.  (God willing, we won’t make it an issue ever.)  Keoni and I used to kiss in the humidor there, although it’s been under construction with a remodel lately…

I’m actually not sure how much of my habit is a physical addition–it’s true that I get a little tense and cranky if I don’t have at least a few smokes in my day, but I don’t know if it’s physical, or if it’s just because I want to smoke.  I do know that my vanilla Cheyennes don’t pack as much of a “punch” as most–when I bum another kind of smoke from a friend, it usually makes me dizzy–so my crankiness may be merely (or mostly) a matter of childish dissatisfaction over an unsatisfied want.

From a practical standpoint, all the “uses” of my smoking could be substituted as effectively (and more healthfully) with an egg timer…  Although that would lack the act of smoking itself, which I still enjoy.  I don’t feel moved to make the exchange… Today.

I’m thinking back to high school, when a classmate once asked me, in the dark at a night-time extra-curricular event, if I had a light–and then realized who I was and fell all over himself apologizing for even asking.  I’d been amused rather than offended by the question, but yeah, I was that much of a goody-goody. With the advent of FaceBook and the re-connecting of the old high school class, my classmates have pretty universally expressed shock at the fact of my Alcoholism–as if there were a “type” of person who becomes an alcoholic, or a type who doesn’t. And in a strange coming-full-cycle moment,  that same boy who’d been horrified over asking me for a lighter contacted me through FaceBook to ask what a man does when he doesn’t know how to stop drinking.

It’s a lesson all around, I suppose, in making Assumptions.  If I’d had a moment’s opening to speak amidst his profuse apologies before he fled in embarrassment, I could have told him I did own a lighter. (I used it to light the burners in chemistry lab.)  And both of us would have been astonished if we’d had a fast-forward button to reveal to us the conversation we’d be having twenty-some years later, and our respective roles in that conversation.

There was a kid in rehab with us, sweet-faced eighteen-year-old still drugged up on meds from the psych ward and doing what the rest of us called the “Thorazine shuffle”–I remember him grabbing me at the shoulder, staring at me intensely (the most focused I ever saw his eyes) and telling me insistently, “YOU don’t LOOK like an alcoholic!”  It seemed hilarious at the time–what a silly thing to say to a fellow “inmate” of the rehab ward.  He was standing in line at the time to get his cigarette for one of the scheduled smoke breaks.  Eight times a day the nurses doled out one smoke each to all the smokers, and escorted them into the fenced courtyard for their smoke breaks.  In all the weeks I was there, I was the only non-smoker in the bunch–at least until Keoni (my favorite person on the ward, and now my husband) started forfeiting his smoke-breaks in favor of staying and chatting with me.  Eight times a day, we had ten minutes to ourselves while everyone else went outside, and by the time we checked out of rehab, he was a non-smoker as well.

I had a conversation once with the Director of the Rehab Ward–a recovering Addict himself, bless his understanding heart–about the apparent irony of providing smoke breaks to people who were trying to break addictions.  He observed (wisely) that in comparison to the immediately life-threatening problems posed by our collective other addictions–the ones for which we’d all been committed there–smoking was not a priority problem, and trying to mess with it at that point could interfere with the more critical Recovery.  I also remember his reaction the time I was lined up alongside the smokers, waiting for them to get their smokes and clear out so I could ask the nurse for my deodorant…  The Director looked startled to see me in the line, and blurted out, “You’re not a smoker are you?”  I had laughed at the Thorazine Kid’s statement that I didn’t “seem like” an alcoholic, but I embraced the Director’s assumption that I didn’t “seem like” a smoker.  The lesson to me, perhaps, is that Assumptions are dangerous, when I can be so wrong even in my own assumptions about myself.

I’m a Smoker.  For today, anyway.  Not a wise habit, though maybe I’m slowly growing some wisdom in other things.  Or… maybe that’s an assumption I shouldn’t trust.

I am... a writer, an explorer, a coffee-drinker, a recovering addict, a barefoot linguist, a book-dragon ("bookworm" doesn't cover it), a raconteur, a sailboat skipper, a research diver, a tattooed scholar, a pirate, a poet, a spiritual adventurer, a photographer, a few kinds-of-crazy, a joyful wife, a mom... a list-maker! :) View all posts by Kana Smith

37 thoughts on “One of My Very Bad Habits”