I’ve been re-reading (actually, it’s more like re-re-re-re-re-…  well, you get the idea) the Harry Potter series this week, occasionally swapping volumes with one of my kids when our progression through the books overlapped…  This is the first time through the books for Elena Grace, who (at age eight) is well acquainted with the film versions–but as Readers know, the books (particularly as you get further on in the series) contain a great deal more than the film-makers could have hoped to encompass, so she’s coming across numerous discoveries in her reading.

And at the same time (not unlike Harry and Hermione when they use the time-turner and end up watching themselves-of-two-hours ago from the shadows) I’m running across myself-from-other-years in the pages of these books. Though I was properly brought up never to mark a book’s page, or even to turn down a page-corner or place a hardbound volume open-and-facedown to mark my place, I admit that I am now a hopelessly addicted marginalia-ist. (No, I don’t think that’s in the dictionary, but in my case it would mean a person who is unable to read without a pen—or, in the case of iPad-reading, a stylus-–in hand, ready to underline, highlight, and scribble up and down the sides of any page that gets me thinking.) So here I am, this week, engaging in a little time-travel by interacting with versions of my former self in the margins of these books. 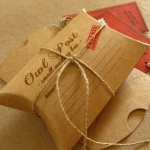 At the end of every novel there’s a scribbled date with my initials—or in the case of these particular books, now, an entire column of dates—accompanied sometimes by the location where I was reading, if I were away from home. At the end of number five, the first read-through (June of 2003) I noted “Boise National Forest,” and I remember now my relief when my pre-ordered book arrived on the morning we were departing to go camping–I’d so hoped I wouldn’t have to wait another two days for the long-awaited next installment. My handwriting hasn’t changed much over the years, though my initials have. I read this particular book five times as J.V.–during a different marriage and while I still went by my first name…

The when-I-read lists at the end of the books, however, are far less interesting to me than the how-I-read notations in the rest of its pages–and it will be interesting in future (when Elena Grace is able to read the handwritten script as well as the printed story) to see what additional questions I might end up fielding from her. 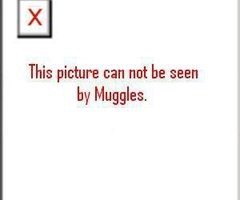 In the ink that matches the reading-sign-offs from 2005, my attention was captured to references of Hermione (who comes from a Muggle, or non-wizarding family) trying to explain her world to her mystified parents. “Maybe not unlike a school for the deaf…” I wrote in one margin. Elena Grace was born deaf, and I had been overwhelmed by the prospect of learning an entirely new language to communicate with my own child. (And—having just taught her three-year-old brother to read—was entirely mystified about how I’d be able to go about that process with someone for whom the words on the page had no connections to the physical language of Sign, which we expected she would be using.)  I’ve written previously about how that story turned out for us (“Amazing Grace, How Sweet the SOUNDS“), but coming across my own notes from the time transports me back with a jolt.

There are bemused notes about parenting among these pages, and about teenagers (I was teaching teens during many of these readings, but didn’t anticipate at the time that I’d soon be catapulted into parenthood-of-teens via stepmotherhood) and classroom dynamics, about some of the perplexing metaphysical questions raised by the uses, abuses, and limitations of magic as it is presented in this series, and a whole slew of comparisons between the Ministry of Magic’s responses to rising danger and the Bush-II administration and Patriot Act, Hitler’s Regime, and the U.S.’s shameful internment of Japanese citizens during World War II… A note in the sixth book reminds me that (the week the book came out, and I knew my class of Physics students had been just as engrossed in reading it as I) my extra-credit question for the week was to answer Mr. Weasley’s dearest wish and explain how Muggles make airplanes stay up! (Answer: Bernoulli’s Principle…) 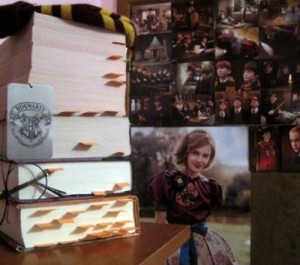 The Harry Potter books (stacked in order with the first on top)–each yellow tab marks a character’s death. Quite the visual…

And there’s commentary here, too, on the deepening seriousness as the series progresses, from the almost-silly first story to a death-strewn finale in number seven, nearly worthy of a Shakespearean tragedy… (Our eleven-year-old son, Christian, just saw Hamlet performed, and compared its ending to the aptly named Harry Potter and the Deathly Hallows. “This book is definitely NOT happy-happy-cupcake-unicorn,” is his precise characterization of HP & the DH… Which–having just finished it yet again–I believe to be its strongest charm.)

Since I started out writing here about my own marginalia in the books, I can’t help but be bemused by the role which marginalia-in-books plays within the stories themselves… The entire sixth book (HP & the Half-Blood Prince) centers on Harry Potter’s relationship-through-marginalia with a previous student who left behind a Potions textbook filled with hand-written notes. And the finale itself, in the seventh book, is unraveled thanks to a clue left behind in the form of marginalia in another book, this one filled with the Wizarding World’s fairy tales.  (Christian just recently introduced me to the related series of books by Rowling–she has gone ahead and written some of the Hogwarts textbooks and storybooks referred to in the main novels. And fittingly, the fairy tales of Beedle the Bard are reproduced with the annotations and Marginalia of Professor Dumbledore’s copy–including that clue… Fun extra read!)

Some critics turn up their noses at these books, point to them as a mere pop-culture fad with sub-standard writing…  I can’t say I agree–I’ve always thoroughly enjoyed the writing, myself, so they must be applying different standards than mine.

But more to the point, whatever a person’s opinions about the writing, I dare anyone to debate J.K. Rowling’s genius for capturing people. Wizard or Muggle, she deftly portrays the nuances and challenges and humor of human nature–up to and including the fact that the character we most fiercely loathe throughout our reading (well, with the possible exception of Dolores Umbridge) is, in fact, one of the noblest and bravest and best people of all–though he remains loathsome right up to his death. Tucked somewhere in the depths of the fourth or fifth book (though featured somewhat more prominently in the film) is one of the truest observations of all time: “The world isn’t divided into good people and Death Eaters.”  Nothing is that simple–in life, or in Rowling’s writing.

Purists may also turn up their noses at the films, which necessarily omit a great deal of the detail, but I’ll say that–with the unforgivable (according to Christian) exception of an entirely omitted battle at the end of number six–they’ve done a pretty good job of encapsulating the themes, the characters, the messages… and don’t forget the fun!  Still, there IS a great deal more to be enjoyed in the books–so if you’re one of the few remaining Muggles who hasn’t yet picked up the first Harry Potter book, I’d urge you on.