By the time we unfolded ourselves from the motor-home’s fold-out bed this morning, the temperature had just pushed into double digits, and I felt intrepid enough to step outside and indulge in my Very Bad Habit…  The foothills beyond the stretch of high-desert prairie were warming in the sunrise light, with a huge half-moon still aglow just above them.  What a stunning backyard–and it’s the same “backyard” everyone has in Carey, Idaho, since the town was platted out in a string of lots lining the highway…

Vonnie, the eager organizer of the community’s revitalization committee, had our day mapped out for us–at least once we poured enough coffee and bacon into The Editor to get him upright and functional.  (This is probably the number-one reason why my cooking-husband Keoni gets to join the magazine’s editorial staff on assignment…)  First up: a puddle-jumper plane ride with local rancher Mike–a pilot skilled enough to cut his engine and drop down among a herd of elk without spooking them…  (Whether his passengers were spooked by this maneuver…  Well, we’ll leave that answer to your imagination.)

The massive lava flows of Craters of the Moon National Monument reach their blackened fingers out almost to the edge of town, and the narrow strip–only as wide as the wagons in places–between the lava fields and the foothills formed the trail which Pioneers took for the Goodale’s Cutoff route of the Oregon Trail.  The Oregon Trail followed the trappers’ trails, which followed the Indians’ trails–and the stage routes followed, and railroads after that.  Vonnie’s son, Dave, owns the ranch that used to be the stage stop, and just turned up some photographs of the homesteading family who lived there a century back.  The dam (a WPA project of Roosevelt’s, back in the ’30s) is iced in, and the ice fishers are out in force today on the reservoir, which Mike says is eighteen inches thick in ice.

Ray, The Editor, and Vonnie

Keoni (who had been enjoying a good book and a cup of coffee in the heated motor-home) grilled sandwiches for everyone, and then we were off for our pickup-truck-tour of the Carey area in the company of 87-year-old Ray–who was born in Carey, schooled in its one-room schoolhouse with “six or seven” other kids, raises Appaloosa horses, and still ranches in the Pioneer Mountains just below his father’s original 1892 homestead.

He says he just lost two calves to wolves this year, a first for him, and mentions the wolf print he saw by his gate, using both hands to show its size.  “What people don’t understand,” he goes on to say, “is that when a wolf takes a cow, that’s a cow that a rancher birthed and raised.  He knows her–that cow had a personality.”  Speaking to the controversial hot topic of wolf-conservationists-versus-ranchers, he adds, “Personally, I think if we were allowed to control them, we could live with ’em.  But you won’t hear a lot of ranchers say that.” 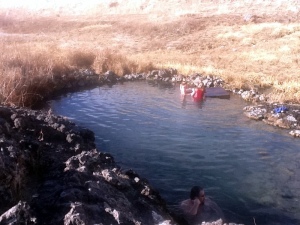 Ray grew up running sheep for his father’s operation, and related a conversation between his father and another ranching friend a while back, after his dad bought an RV for retirement years.  “I can’t understand why you bought that trailer,” his buddy said; “You spent your whole damn life hauling around a sheep camp, and now what you’ve got is an expensive sheep camp!”

Near the boundary to Craters of the Moon, we pulled over at an unmarked spot in the road and walked just half a minute to a thoroughly inviting natural hot spring, complete with a soaking family whose clothes were piled at the edge.  No signage at all–but the locals know where to find it!  Geothermal is a viable source of energy here, as close as we are to the volcanic activity of Craters of the Moon; even the new school building is running entirely on geothermal.

Our motor-home is plugged into Vonnie’s house, via an extension cord wending its way among the collection of old milk cans left over from her husband Paul’s years hauling milk for the dairy operations.  Vonnie and Paul had invited us “next door” for dinner this evening. Vonnie teased that she’d begun to doubt Keoni’s existence, since she hadn’t yet met him–to which I replied that my son has an imaginary Dragon, and apparently I have an imaginary husband…

A certain bird-hunting writer–photographed right around here, and familiarly remembered by the long-time residents of Carey…

Like Ray, Paul was born and raised in Carey, and reminisced over dinner about the many things the young people used to do around here before the advent of television.  The hunting, the fishing, the mountains, the ice skating–kids used to build huge bonfires out on the lake and skate all night. In the canyon Mike flew through this morning, a person could theoretically fill every hunting tag Idaho offers–and Paul echoes Ray’s observation that the duck hunting here is the best in the state.

Hemingway used to come over here all the time to bird-hunt, he offers casually.  And then: “I was working over in Ketchum the day he shot himself.  That was a bad thing–got that clinic diagnosis, went home and put that shotgun in his mouth right at the house.  Never would have expected that of him–he was always so macho.  But then again, he wasn’t what he used to be.  He’d come down to the Stagecoach [bar], and you could barely see him over the steering wheel.  Not the Hemingway he used to be.”  The iconic literary legend who has always been a two-dimensional cardboard cut-out in my mind… pops into three dimensions hearing someone who knew the man speak so casually and warmly about him…

Keoni and I excused ourselves back to the motor-home after coffee (he needed to put his new knee up for a rest, and I have some writing to get done)–although we couldn’t get away without first answering Vonnie’s request for some of the stories behind our tattoos…  Tomorrow the “tour bus” moves on to Arco, the first town in the world to be run on nuclear power.  I wonder if they have a glowing hook-up for the motor-home?

13 thoughts on “Ice Fishing, Hot Springs, and a Duck-Hunting Writer…”