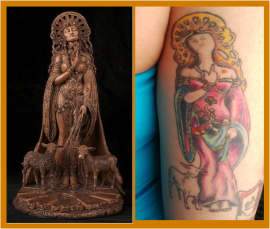 Brigid with the Imbolc lambs (and on my arm)

It’s Imbolc, a fire feast and a day that belongs to Brigid, Celtic goddess of fires, of home and hearth and healing, of smithcraft and wordcraft. (Or–for those more comfortable with a different version of her–Saint Bridget, patroness of those same things, as she has also been known since the Catholics co-opted her some centuries back…)  Imbolc celebrates the lambing, the new life of spring after the dark of winter, the coming of Light.

It’s a celebration of beginnings, of cleaning house both literally and figuratively, of lighting the dark corners and praying for continued blessings in the upcoming year. At this time last year, my husband Keoni and I had only just collected our 30-day Sobriety chips after our awful alcoholic relapse, and it was a time of intense spiritual house-cleaning.

Despite my Irish roots, last year was the first that I took Imbolc to heart, right down to the symbolic broom Keoni made for me from the dried lily-stalks in our yard, and the string of turquoise prayer-beads he strung for me, not in ‘catholic’ decades, but in thirteens…. (That’s a number signifying transition, resurrection, and ascension or enlightenment; and a gemstone esteemed in ancient cultures around the world for its putative healing properties… And which, on a more humorous note, matches my entire closet…) .

I think it was good ol’ Groucho Marx, whose humor sometimes hid his wisdom, who said:

Blessed are the Cracked, for they shall let in the Light.

We had quite thoroughly cracked ourselves…  And so… It has been a year of Light.  With its darknesses too, as my writing the other day no doubt illustrated. But there’s the Light shining through, too–in the prayers and virtual hugs and uplifting comments that all of you sent my way in response to that post.  My deepest, heartfelt thanks!

And–to highlight some darkness–in all fairness I have to observe that, although I don’t believe the ex-husband’s behavior (especially in front of the kids) was in any way excusable, his underlying mistrust of me is not unfounded.  If I thought he’d pretty well ridden his “High Horse” to death when I was 22 months sober–well, I handed him a brand new horse when I drank again.  Trust might heal with time, but I don’t have the right to expect it from anyone.

One of the many people whose trust I had train-wrecked was my sister… We each only have one sister, she and I–but I had been allowing myself the illusion that she wasn’t interested in having hers anymore, and I had been determinedly withdrawing for a good while now…  But, in the spirit of spiritual house-cleaning, that’s one of the functions of the A.A. Ninth Step of “making Amends” to those we’ve hurt. And this week I fumbled my way into the beginning of the Amends process with my sister.

I say “fumbled” because (since we’re shining lights into dark corners here, I must be honest) I began by behaving very badly, and unloading a resentment of mine–which (I quickly realized in reading her thoughtful response) was a ridiculous thing to do when I hadn’t yet stepped up to my own damaging drinking behaviors that so severely impacted her.  With the wise guidance of my Sponsor (the “Jiminy Cricket” conscience who sits on my shoulder and suggests I get my head out of my ass when my head is getting ahead of my Recovery) and some heartfelt prayer, and the open heart of a sister who, in fact, doesn’t wish to be rid of me, that bad beginning actually drop-kicked me into an overdue beginning at Amends.

Making Amends is not a matter of apologizing.  As my Sponsor says, people have been hearing “I’m sorry” from us drunks too many times to make it a meaningful statement. Rather, it’s an accounting of the harms we’ve caused someone, followed by the question: “What can I do to make this right?” So today I’m in possession of a treasured answer to that question, and today is a life with my Sister in it once again. Talk about the Light shining through the Cracked Places of a Soul!

The prayer hand-written on the fly-leaf of my battered A.A. Book–the prayer I usually use when those prayer-beads are in hand–is one that was written to Brigid, although it could certainly be directed to a Higher Power in any form… 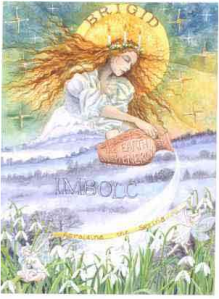 Make me strong in spirit,

Help me act in wisdom,

discover the hidden gifts within me,

meet others with compassion,

be a source of healing energy,

and greet each day with Hope and Joy.

So on that note…. Here’s wishing you a Blessed Imbolc, or Happy Candelmas, or Merry Groundhog Day, or…  simply a day of Blessings and Light.

36 thoughts on “Shining a Light into the Dark Places”