As of last weekend, our little Idaho “homestead” is up in population by seven, thanks to the adoption of seven (long-awaited!) laying hens for the chicken-house we’ve been all summer building.  With the kids incoming for the weekend, I contacted everyone on Craigslist who was offering chickens, and we lucked out by hooking up with Rob Newburn of Rockin’ R Ranch. He turned out to be a wealth of knowledge, and (bless his heart!) spent more than an hour with us when we arrived, showing us his various breeds (though we could only afford the $3 “black coppers”) and filling us in on all sorts of chicken-care nuggets of wisdom.

Hearing that our “chicken project” had been instigated at Christian’s request, Rob also rounded up a Barnevelder hen with beautiful brown coloring to her feathers, and presented her to Christian as a gift, to be his “special chicken.”

Keoni & Christian with the first pair of rounded-up chickens

We’d brought some U-Haul moving boxes from our shed (pre-printed on the sides with various possible purposes and rooms for movers to mark, but strangely enough, no pre-printed checkbox for “chickens”), and under Rob’s direction the kids took turns cutting air-slats in the sides before heading into one of his many hen-houses to pick out our chickens. After a quick demonstration on chicken-handling, Keoni and Christian rounded up six hens, helped along by Rob’s sage suggestions and bemused commentary…

Having taken up more than we’d intended of his Saturday morning, we bid Rob a very grateful goodbye and headed home, stopping just for a moment to scrounge some hay from the ground on a public easement by a horse pasture. (In case you’re wondering, this blog is NOT sponsored by the word “scrounge,” though I certainly wish someone were paying us for every time I use it!) 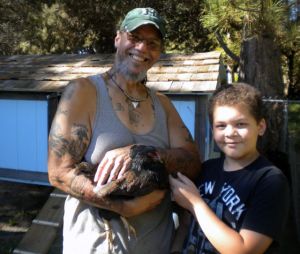 Chickens are home! (And please check out the awesome shingling-job Keoni did since I last posted photos…)

Back home, Christian distributed hay among the “nesting boxes” (kitchen drawers, scrounged—of course—from the neighboring trailer that was due for demolishment) and then we turned “the girls” loose!

Our neighbor Bill (happily for us, an old hand with chickens) came over to meet them, and shared with us how to clip the flight-feathers on their wings. This, in turn, led to my toilet-tweet (isn’t social networking wonderful?): “What every mom wants to hear through the bathroom door: ‘Mom, where are the BEST scissors you’d let me use on chickens?'” Out came the sewing-shears (what the heck, I know a guy who sharpens stuff!), and we clipped the wings on all seven hens.

“Ku’oko’a” on the roof. Happily, she always hops back INTO the chicken-yard when she’s done up there.

The “special chicken,” however, quickly decided that clipped wings were no impediment to flying up on the chicken-house roof! (Christian thinks her name might be “Freedom,” and we’ve been tagging her since with the Hawai’ian variation of ku’oko’a, while waiting on his final decision.) She’s definitely her own lone hen. We’re only beginning to learn chicken-culture, but the other six chickens huddled up in a heap in a single nesting-box that night, while she sat aloof in one of her own. Having watched the other six “settle” who would be on top and who on the bottom of that heap, there’s no doubt in our minds where the expression “pecking order” originated! 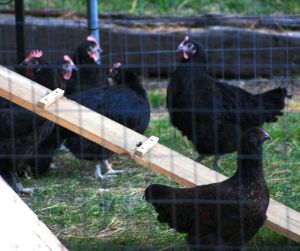 “the girls” settling in to a new home

The kids headed back to their dad’s house for the school-week, so we’re on chicken-duty in their stead, and sending updates (and photos) by email. I’m suddenly reminded of when Christian was about three years old and begging for a kitty. Before we made any move to visit the animal shelter, I had him go through the motions of cat-care (filling food and water bowls daily) to show that he was ready for the responsibility. He invented an invisible cat to go along with this ritual (named Clay, for reasons still unknown to me), and when we finally did visit the Humane Society, our choice was clinched by his excited exclamation that “THIS kitty looks exactly like Invisible Clay!” 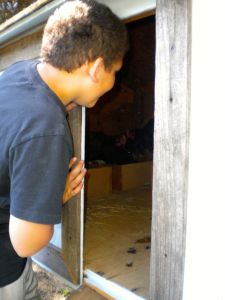 Christian saying goodbye—till our next weekend!

I think our roles have been reversed now, and Christian has been training me up for chicken-care with the previous task of “feeding” his electronic reef-fish in the game on my iPad!  Hmm, I’ve accidentally let the reef-fish “die” on more than one occasion… No doubt he’s glad Keoni is on the spot!  And sure enough, I woke this morning to the sound of Keoni outside the window, calling “Hele mai, moa! Hele mai, moa!” (“Come here, chickens”) as he tossed out feed on the ground. Rob cautioned us not to expect eggs until they’ve had time to settle in, but hopefully they’re on their way to getting comfy…

In the meantime, we’re suddenly looking at the onset of Autumn here. Yesterday I was on the front porch with my book, perfectly comfortable in shirt-sleeves, and tonight we’re looking at our first hard frost. The sun has just called it a day and the moon is on the rise (seemingly magnified by the lingering haze from the summer’s forest-fires), and neighbors Bill and Anatoli are both out blanketing their vegetable gardens with tarps against the expected freeze. 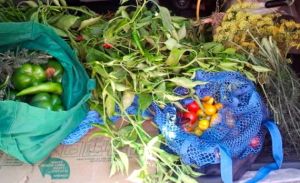 last harvest before the frost—an unexpected bounty from a newly-met neighbor!

Earlier this afternoon, Keoni made a run to the mailbox (another adaptation of “Emma” in the mail!) and found himself waved across the road to meet a neighbor we hadn’t yet encountered. We watched his thriving roadside vegetable-stand all summer, and today he was trying to harvest and offload everything that was left, before the frost hit. At his urging, Keoni brought home a haul of peppers and cucumbers and yarrow and dill and tomatoes, and we feasted tonight on stuffed bell-peppers and fresh salsa.

a jar from Keoni’s first batch of pickles—a definite success!

Keoni has already turned out his first batch of pickles this week. Bill and Anatoli have both been sharing armloads of their cucumbers, so today we were able to reciprocate with mason-jars of home-made sweet pickles. Christian and I are looking forward to the next batch: dill pickles! Neither of us has historically been a fan of the sweets (though having said that, I did sample this batch, and was amazed to discover that I loved it)—but Christian has been known to eat a whole jar at a time of dills. (Cast-iron stomach, that kid…)

I’ve finished up my own little harvest—all of our lavender is now hanging to dry (mostly destined for our home-made shampoo & conditioner), and I’ve stripped the monster sunflowers (growing up around the bird-feeder) of their seeds. I’m saving about half of them to plant along the fence-line next summer, in hopes that we can keep both our neighborhood songbirds and our kids satisfied without resorting to “bought” seed. We’ll roast the other half when the kids are back for the weekend.

Another fence-line already has raspberries planted—shoots we brought back from my dad’s burgeoning thicket. And Keoni’s potted kitchen-herbs (bedecked in the kids’ colorful artistry) are pulled in and tucked up on the porch. I don’t know if I’m ready for winter (despite the purring cat on my feet), but I think we’re at least ready for frost. And I’m thinking our first (modest!) summer of “sustainable homesteading” has been a pretty good success. Please pass the hot cocoa!