The first glimpse of ocean is a spiritual moment, every time.

We made it as far as Bend, Oregon, last night before calling it quits and settling into a motel that was unquestionably clean, but quite questionably decorated… We walked this morning to a small diner for COFFEE (and ok, breakfast) and then hit the mountain roads to the coast and arrived at our Newport campground around lunchtime.

After offloading the motorcycle from its trailer, we got camp set up with semi-military precision (Jon being the “military ” half of that equation, and me being the “semi”)… And then we took out the bike! 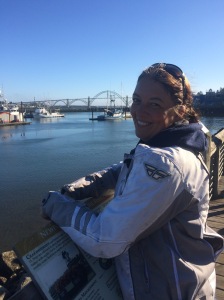 Newport’s bridge is iconic to this area like the Golden Gate is to San Francisco, and I’ve always loved driving across it. But oh my gosh! It’s amazing how different the crossing is on a bike!

In a car or truck your view is constricted and framed, but on the bike you have the full 360 view at once—not to mention the unimpeded soundtrack and the full smell of ocean air. The marina of sailboats, the channel out to sea, the gulls, the returning fishing boats, the overarching green bridge structure—its all so much “closer” when you’re on a motorcycle. I tried to take a photo, but realized the photo has the same limitations as a windshield—only a fraction fits in the frame. So I have to leave this one to words.

I love experiencing something familiar in an entirely new way. Reframing an experience by losing the frame.

I am... a writer, an explorer, a coffee-drinker, a recovering addict, a barefoot linguist, a book-dragon ("bookworm" doesn't cover it), a raconteur, a sailboat skipper, a research diver, a tattooed scholar, a pirate, a poet, a spiritual adventurer, a photographer, a few kinds-of-crazy, a joyful wife, a mom... a list-maker! :) View All Posts