Boise Idaho is bearing up under record-breaking conditions this week. We have more snow on the ground than EVER. (Well, at least the “ever” that dates from 1875 when someone started measuring.) We have wind-chill warnings for -25F and more snow on the way, possibly to be followed next week by rain, of all things, and likely flooding…  All that to say that I’m not going out much this week!

Aside from my “commute” to the RV park office (thankfully, only a three-minute walk) I’m playing Hobbit and holing up in the cozy confines of our RV! Nevertheless, my mind is free to wander. No, wait—that’s not what I meant. My mind is free to travel, and I’ve decided that this is going to be my Year of the Travelogue. 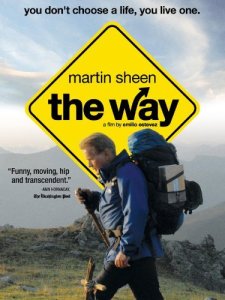 My mom & Jon & I watched “The Way” (Martin Sheen & Emilio Estevez, 2010) during our Christmas visit, and it fired up my already-engaged gears on the subjects of Travel and Experience. I’m ultra-aware right now of the possibilities inherent in living-on-wheels, and the travel-bug isn’t new to me… Even more than GOING places, though, it’s an urge to EXPERIENCE places, which is what that film really explored (in my opinion). And that’s not to exclude whatever place I am right now, even when that might be holed-up-at-home.

For over a week now, I’ve had the Wikipedia-page for “Rihla” open on my iPhone, and it keeps drawing me back.

… the genre of work called Rihla … or the creative travelogue: a mix of personal narrative, description, opinion and anecdote…

I abhor travel guides, but I love travelogues. And I think this excerpt from Arabic culture has nailed the distinction: a travelogue is a creative and personal work. It’s a work about a person’s experience, rather than merely about a place. (It’s what this blog is for me.)

When GoodReads asked me the other day how many books I plan to read this year, I promptly told it “52.” (I guess a book-a-week seems tidy.)  52 Travelogues. A year of reading Rihla in its assorted iterations.

(And yes, this is an partly an effort to make my “read-a-lot” goal more measurable, as I resolved this week to do with my goals…)

I picked this one up just after we watched “The Way,” which revolved around a pilgrimage on the Camino de Santiago in Spain. Which, by the way, is a walk of five hundred miles. Sunshine Jen’s approach is light-hearted with deeper moments and lots of practical suggestions—a quick read with some good quotes.

I begin to think that packing light is going to be a common theme as I read travelogues; it certainly made an appearance in the next book, which arrived in the mail from my mother yesterday. (Incidentally, I hadn’t yet told her my plan to read travelogues this year…)

(#2) The Oregon Trail: A New American Journey, by Rinker Buck

This nut and his brother took it into their heads to “do” the Oregon Trail in a restored covered wagon with a mule team. Despite the re-enactments of which we see pictures, no one has actually done the whole trail (from Missouri to Oregon) by wagon for over a century, let alone without motorized support vehicles.

Rinker is a moody and impractical romantic—fortunately balanced by his no-nonsense brother Nick, who can fix anything and can “call mules” like nobody’s business. Rinker’s book-sense and Nick’s actual sense actually seem to balance without (many) major conflicts, and the result is a picturesque and sometimes lyrical view of the Oregon trail as it is today, with imagined historical glimpses along the way.

Rinker writes of his brother: “Nick is a gorgeous cluster of auto didacticism, and you can’t believe that this guy standing next to you with hydraulic fluid all over his shirt is more erudite than the curators at the Smithsonian Institution.” By contrast, Rinker tried to pack a shoe-shine kit, a Brooks Brothers bathrobe, and a can of spray starch (for ironing shirts)! Enough said. He’s at least aware of his own foibles, though, and writes that “Creating a new discard pile of my possessions was a useful exercise in self-analysis.”

“And when my brother called the mules I felt I was living a stanza of Walt Whitman”… A lot can be forgiven for a line like that one (at least for this Whitman fan). And there is some to be forgiven (at least for this RV-ing Idahoan)… Like the fact that he practically skipped Idaho. In a book of 450 pages and a crossing of our entire state, he spent about one chapter saying (more or less) that Idaho was nifty and YAY there’s Oregon! I’d been really looking forward to seeing my home turf through his waggoneer-eyes. Rats.

I was also taken aback by his absolute contempt for RVers. Part of the appeal his trip held for me was the idea that he was undertaking the original American “mobile home” experience—he even quotes another Whitman (Narcissa, of Mission-and-wagon-train fame) “about the ‘moving village’ of the caravan”…  I know dozens of people who are living that as a lifestyle, just with motors instead of mules; they share so much of his Experience Ethic, but he dismisses them all as “road geriatrics” on “an adventure in bad taste,” not to mention “relentlessly bad drivers” whose very minds he mocks.

So OK, I didn’t relish every page of the book, but I’m nerd enough to enjoy some of his side-trails of dissertations (on mule-breeding history, frontier economics, American religious sects), if not all of his politicized commentaries or weirdly inserted flashbacks about his father. (I kept waiting for the dad-threads to tie in to the present journey, but aside from the introductory bit—a covered-wagon vacation in their youth—they really didn’t.)

My hat is absolutely off to him for the journey itself, especially given that he’s a shirt-presser who actually devoted himself to the discomforts and dangers of trail life for the months it took to reach Oregon. It’s a journey of personal change (as most are) for him to be able eventually to write: “I had my mantra now. Uncertainty was a sacrament and the quest for miles meant that we’d never know where or how we’d end the day.”

I know some RVers he’d enjoy, if he’d just overlook their mode of transport.

Next up? Inspired by Buck’s mentions of him, I’ve just started Mark Twain’s western travelogue… And I’m also noting, thanks to Carrie Fisher’s mention of Twain in Wishful Drinking (a book that doesn’t count toward the travelogue-total, though the hilarious treatment of her Hollywood-scape almost makes it one) that this writer who was laugh-out-loud funny also suffered from Bipolar Depression. Like Fisher herself, which is why she brought it up. And like me, which is why I find it somehow heartening. Or, to quote Carrie: “After reading this list [of Bipolar people] I felt invigorated—but then that is part of my diagnosis.”

What else should I read? Please tell me YOU have a favorite travelogue to recommend!

I am... a writer, an explorer, a coffee-drinker, a recovering addict, a barefoot linguist, a book-dragon ("bookworm" doesn't cover it), a raconteur, a sailboat skipper, a research diver, a tattooed scholar, a pirate, a poet, a spiritual adventurer, a photographer, a few kinds-of-crazy, a joyful wife, a mom... a list-maker! :) View All Posts