Last week CBS This Morning hosted a lexicographer from the Merriam-Webster dictionary, talking about the malleability of language and the ongoing task of incorporating new words into the dictionary. Although prescriptive grammarians (unlike descriptive ones) would have you believe that our language and its rules are static, nothing could be further from the truth. (Sure, I know when I’m supposed to say “whom”—and I sometimes even do it—but these days those rules are largely at odds with actual usage.)

Speaking to new words that have been recently incorporated, the Merriam-Webster editor gave examples like “photobomb” and “binge-watch.”  By this point, “selfie” has been in the dictionary so long it’s old news. I’m fascinated by the cultural commentary afforded by new words…  The one I’m interested in today has only been in the dictionary for a couple years, and won Oxford’s “word of the year” honor in 2014:

The Merriam-Webster definition adds to the verb definition of vape: “like someone smoking a conventional cigarette.” That definition might already be outdated. Most of today’s vapes have so little in common with cigarettes that they’re not even getting called e-cigs anymore. Early models did look like cigarettes, but these days they range from boxy models to flashy pens—virtually no resemblance to the nasty originals.

Yup, I just called cigarettes nasty. I actually thought so even for the eight-or-so years that I was obsessively smoking them. And there you have the strange face of addiction. Cigarettes are nasty—but I liked them. They were my friends, They were a treat, every time I lit up, even though I hated the lingering ashtray-odor that clung to me afterward.

I’ve only recently returned to the ranks of non-smokers, though I’d been wanting to quit for most of the year previous. Wanting to quit, but not willing to let go. Three things finally got me over the hump: my husband, and my vape, and some adjustments to my mental-health meds.

Jon smoked for thirty years himself, and there’s no one like an ex-smoker to be super-sensitive to the ickiness of ashtray-mouth! He never nagged me about quitting, but he wouldn’t kiss me after a cigarette until I’d brushed my teeth, washed my face and hands, blown my nose, and gargled with mouthwash! Even that routine didn’t immediately deter me from my nasty habit, but his mildly stated wish that I’d someday walk away from the cigarettes did its work over time.

I think it worked because he didn’t nag, didn’t take a high-horse moral stand, didn’t rub my nose in the fact that he’d managed to quit, didn’t denigrate me. He just declined kisses, and periodically observed that he hoped I’d put the smokes down when I was ready. I already knew lots of reasons why I should quit, but his quiet confidence that I eventually would definitely helped turn the ship around. Jon’s influence was the most immediate and present reason I wanted to quit. 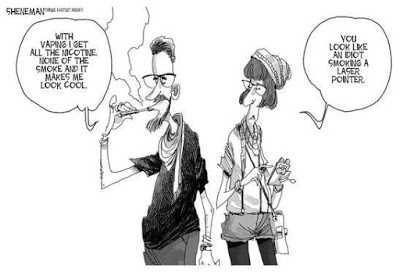 And then there’s the vaping, which helped me with the “how” of quitting. I don’t even think it’s about the nicotine—I don’t use a high-concentration liquid—I think it’s about replacing the habit, substituting the “treat” of smoking with a better treat. It took me a while to get off the cigarettes entirely—I was still smoking one or two a day for a good while, but that was loads better than the pack-a-day I’d been smoking previously. And finally I managed to let even those ones go. I wasn’t sure I’d ever let go my first-smoke in the mornings, but even that one slipped away. I’d think about it, but reach for the vape. That’s when I knew I’d made it!

Last week I bummed a smoke when my vape battery ran out, and it was actually icky. Not just I-know-it’s-yucky-but-I-enjoy-it-anyway. It was utterly icky. YAY! (Or, to use another term that just got dictionary-approval: awesomesauce!)

Until “vaper” got added to the dictionary, the only available spelling was “vapor” (or okay, “vapour” for you Brits)—and in its older iteration, “the Vapors” referred to a variety of disorders generally chalked up as forms of “female hysteria.” Hmm… Female Hysteria covered PMS and mood swings, yes—but it also extended to clinical depression, bipolar disorder, and withdrawal syndrome. As a sufferer of all of the above, I have to point out that the Vapors lumped together some serious stuff under a pretty dismissive heading.

I’m grateful today that vaping eased my “Vapors” of withdrawal, and that I live in a time when my depression-and-bipolar “Vapors” are treated, rather than dismissed as hysteria. I think it’s no coincidence that I got quit of smoking (at last) at a time that corresponded with my mental health meds (at last) evening out my emotional life. Until pretty recently, I guess I felt I needed that go-to emotional crutch. But ultimately Jon was right: when I was ready I’d let it go. 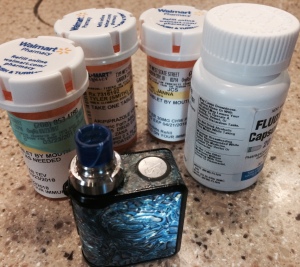 staging a QUIT: mental-health meds and a vape

And I’m beyond glad. My food tastes better, the blooming lilacs smell better. I smell better! I treated myself to some Crest white-strips, which seemed pointless while I was still smoking, but now my smile is brighter. I breathe better—and even if the Stairmaster kicked my butt last week, I can go forever on the treadmill. I’m not huddling outside in a rainstorm or on a frosty morning to drag on a cigarette. I don’t have to disinfect myself before kissing my husband.

Of course there are the “invisible” health benefits too—I know I’ve just improved my heart-health and decreased my cancer risk—but let’s be honest, it’s easier to celebrate the tangible gains. My mother will celebrate those invisible benefits for me, because now she can cross the one item off her list of things-to-worry-about. (Though I just added a new item to that list with yesterday’s post about riding motorcycle. Sorry, Ma!)

All in all, I’m happy-dancing… and I’m not out of breath doing it!

What’s your story on smoking? Please do join the conversation below!

I’d like to give a cross-country shout-out to my “online roomie,” Pepper, who also just quit her cigs! We’re happy-dancing together, long-distance!

9 thoughts on “On Vapors, and Vapers”