Aww... Is there anything sweeter than little-kid shoes?

Just a handful of years ago, I was a newly-single mom with two little kids, and the after-school heap of things by the door consisted of Tinkerbell backpacks and Toy Story notebooks, and those cute little shoes that are so adorable they can make you want to have more babies.

Fast-forward (past the wedding which made me a joyful Mom of seven) to this morning, when I completed my (near-daily) ritual of tripping over a pair of Mens’-size-fifteen sneakers by the door.  Twice.

Evidently I’m no more capable of training myself to avoid this obstacle than I am of training the oversized feet that occupy these sneakers to walk as far as the boys’ bedroom before shedding them…  Truth be told, though, I haven’t made a pointed effort at the latter–a wise parent knows to pick the “battles” that are worthwhile, and in the case of a sixteen-year-old navigating the world and testing his independence, we have bigger fish to fry.

Three of our Seven: Elena Grace, Christian, & Kapena, picnicking at the State Park where I worked last summer

Don’t get me wrong–Kapena is a good kid.  He holds down an after-school job, captains the Defense of his football team, and maintains straight As at school. He’s the kind of kid who doesn’t hesitate to kiss his Dad on the mouth (a bit of Hawai’ian culture there) on the sidelines of his football field in front of his teammates and coaches and girlfriend.  His name–a Hawai’ian word meaning leader–suits him admirably, and he displays compassion and maturity and manners and self-awareness, characteristic of someone well beyond his own chronological years.  Still… He’s a teenage boy.  (Insert both a grin and a grimace here…)

Every school-morning our house is redolent with the mixed aromas of the crepes or pancakes Dad cooks up to fuel Kapena for the day, the heavy haze of “Axe” cologne carried out of the kids’ bathroom on a cloud of shower-steam, and the strong pot of coffee to be poured into travel-mugs for the drive to school.  The drive itself is a ritual of dad-and-son bonding time, a daily quarter-hour of man-to-man chat about whatever’s up in the kiddo’s life…  But when it comes to the heavier topics, those tend to arrive by text chat.  Evidently a teenager finds it an easier approach to broach a difficult subject by SMS than in person–and for whatever reason, those topics tend to ring in on my phone.

Yesterday brought one of those–the kind of message signaling that it’s time to kick into high-gear Mom-Mode.

As I wrote a while back (Wicked Stepma, Advice Columnist), the “Wicked Stepma” label is my own joke about myself, but Kapena actually doesn’t use the “step” designation. (Except in moments when Dad embarrasses him–popping out in a Hawai’ian mu’umu’u, for instance–in which case Kapena groans and tells his friends, “That’s NOT my Dad. He’s just the guy who’s married to my Stepmom.”)

In fact, his references to me as his Mom have been pretty pointed since last year when his abusive other mother beat him bloody, and lost her remaining share of custody after the Protection Order we filed.  One of the things I’ve learned about victims of abuse (not only Kapena, but his six-foot-five ex-Marine brother Kawika, and my own husband Keoni–all of whom suffered for years at the hands of the same controlling and poisonous Abuser) is that there’s some serious “reprogramming” to be done when they have the opportunity to adjust to life in a safer environment.

One of those adjustments has definitely been the ability to converse.  I remember the early days of his acclimation to me as a household-adult, when he would cautiously venture a perfectly reasonable request (like a few hours at a friend’s house after school) accompanied by all the cringing body-language of a frequently-kicked puppy.  “Sure,” I answered repeatedly, to his reasonable requests–prompting a curious question from him after the first few repetitions.  “Really? You’re sure? Because you’ve said ‘yes’ every time I’ve asked something, and that’s just weird to me.”  Even weirder (he told me later) was my response: “Honey, I WILL say ‘no’–when there’s a reason to say no.  And I will share the reasons, and I will listen to what you have to say, and Dad and I will stand by the ‘no’ when we think it’s important.  But if there’s not a reason to say ‘no,’ I’ll say ‘yes.’ So why don’t you grab my car keys and we’ll go sign you up for that driving permit I just said ‘yes’ to.”

There have been occasions when I’ve reminded him of that conversation, in response to his pleading for a reversal of the (fairly rare) NO–and evidently that reminder is his signal to cease begging. “OK, I understand,” is his standard response at that point–not happily, but resignedly–and, these days, without the residual haunted manner of the kicked puppy. But parenting isn’t always so cut-and-dried as a simple parental ‘no,’ and (to bring my meandering digression back to the Present) yesterday’s conversation-by-text was an example of a trickier matter.

Football is Kapena’s Passion.  Well ahead even of the cute little cheerleader girlfriend.  And he’s good—we’re talking scouts-and-scholarships-good, and this was only his Sophomore season.  His teammates call him “the Flyin’ Hawai’ian” (a rather catchier title than his Dad’s football-nickname of “Twinkletoes,” bestowed back in the day for the same reason).  He just signed up for a Spring League to keep him in practice for the “real” season, and he’s looking for ways to work on building strength.

Enter: The Lure of The Quick Fix.

One of his friends has been taking a  so-called sports supplement, and “he’s getting huge,” Kapena texted enthusiastically–and he wants to try it out for himself.

I’m grateful that he’s initiating this conversation rather than keeping his deliberations private; and I’m grateful, too, that on some level he clearly has some hesitations of his own (as evidenced by the fact that this IS a texting-conversation, which he generally reserves for the “tough topics” he doesn’t want to launch face-to-face).  Still, he clearly WANTS us to endorse this scheme, and he’s bringing the full sales pitch to bear.

It’s all-natural… It’ll boost my own body’s natural production of testosterone, so it’s not like taking steroids…  It’s legal, and it doesn’t show up as a banned substance on drug-testing for sports… My friend has been taking it, and he’s getting HUGE, and no bad stuff happening…  I bet it will help me grow taller…  They sell it at the Health Food store, so it can’t be bad for you… I already researched it on Bodybuilder.com, and they recommend it…

It doesn’t take much research on his proposed “supplement” to confirm what my biology background already told me: this is Not a Good Idea.

However.  This is also not a topic where saying-no-with-reasons will necessarily close the matter.

I’m not an “ostrich parent”–I don’t bury my head in the sand, and I know the real-world score. If Kapena made the decision to go forward with this supplement he’s so excited about, he COULD.  It’s legal, it’s accessible, and he has his own money.  (I’ve helped him with the life-lesson stuff of setting up his own bank account and direct deposit from his job, and we’ve had some budget-lesson sessions, but–another aspect of the life-lesson stuff–the money he earns is entirely in his own control, to blow or to budget as he decides.)  I could tell him “No” right now–but that wouldn’t be the most effective parenting-choice on my part.

Enter: New Tactic. Let The Biologist field this one instead of The Mom.  No statements that carry a value-judgment, just discussion of Physiology….

Let’s see, some things to consider… Physiologically speaking, boosting your own testosterone-production isn’t  different from taking manufactured testosterone–and actually, for all intents and purposes testosterone IS the steroid in “Steroids.”  So we pretty much are talking about steroids here, even though they’re legal.  Bodybuilder.com (and the “Health” store) endorse them because they sell them, so let’s look deeper.

At sixteen, your body is pretty much at max testosterone-production already; even the endorsers of “testosterone boosters” are endorsing them primarily for over-thirties, so it’s hard to say how effective the “boost” would be as far as muscle building. One of the things I’d really want you to think about is testosterone’s function in young adults–specifically, it’s one of the influences that hardens the growth plates at the end of your bones as you reach adulthood so you stop growing. 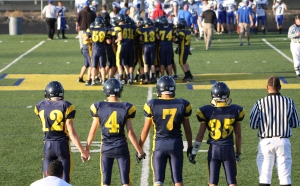 team captains... including our #35

I knew that one would give him pause–he’s keenly hoping to reach something like his brother’s six-foot-five stature, and if those enormous shoes over which I so regularly trip are any indication, he may have the genes to do so. Realizing that excessive testosterone could stunt his growth–that, in fact, ending pubescent growth is one of the things testosterone DOES–may just be the kicker on his decision.  And I haven’t issued any ultimatums or orders, so the conversation is still “on.” Though at this point there’s a lo-o-ong silence in it.

And then, finally: “Maybe it’s not such a good idea.”  Now it’s Mom’s turn to talk.  Let’s think about some other approaches to punch up your game.  We have a great resource right here at home, after all–Dad played high school football with some Greats like Mosi Tatupu and Keith Uperesa, got recruited out of Hawai’i to play for Arizona State (might have had Pro possibilities until the injury that killed his scholarship), and went on to hold a nineteenth-in-the-nation ranking in Competetive Drug-Free Powerlifting.  How about if we bring Coach Dad in on this?

Since yesterday’s conversation, the two of them have applied at the YMCA for a low-income family membership so they can start on a workout regime, Keoni is busily building the weight-lifting program, and the pair of them are researching a different category of supplements along the lines of proteins instead of hormones.

As for the two of us, we take a deep breath, say a prayer together, and keep on Parenting–because tomorrow there will be something else.  With luck it will be one of the simpler Mom-Jobs like killing a spider in his bathtub (he’s terrified of them) or dyeing a load of athletic socks pink because the team is supporting Breast Cancer Awareness… But just in case–if you’ll excuse me–I’m going to go ice my texting-thumb now.