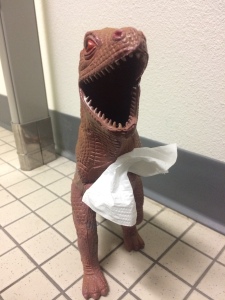 “He says his name is Tobasco. Don’t forget Kleenex.”

Last week at the beginning of a session, my counselor handed me a plastic dinosaur. I tucked it under my arm as we talked, and waited for him to tell me what was up with the toy. Of course he didn’t start by telling me anything; instead, he asked me what I “noticed” about the T-Rex… And the obvious observation is that he’s full of holes.

Bullet holes, as it turns out.

He’d been used for target practice the previous weekend, 9 millimeter rounds. The next obvious observation is that a 9mm bullet hole looks WAY different in a plastic toy than it does in a human forehead. That’s precisely where he was steering me, and the ensuing hour was an intense “unpacking” of my late husband’s gunshot-to-the-head suicide in my presence.

I don’t think I’d dug through that event in such detail ever, certainly not out loud to another human being.

Or to a dinosaur, for that matter.

“coloring therapy when I feel roar-y”

I turned that toy over and over in my hands as I talked and cried, laying him in my lap long enough to blow my nose (on paper towels—I gave them a hard time about not having a box of Kleenex, given the work they do) and then picking him up again. I got up to leave, still hanging on to him, and asked on a whim if I could borrow him for the week. Sure. Does he have a name? Nope.

On the way out of the building I stopped in the ladies’ room to blow my nose and clean up my face, and texted a photo from the bathroom, of the T-Rex holding toilet tissue: “He says his name is Tobasco, and don’t forget Kleenex.”

Over the next few days I made sort of a game of taking pictures of Tobasco (and no, I don’t have any idea where that name came from; it just popped into my head, and I’m trying to roll with “gut feelings” these days)… I brought him to work and took a shot of him at my computer. (“Not much of a typist–the arms are too short!”) I took his portrait in front of a Christmas tree, and with my teddy bear, and holding a colored pencil up to the coloring-book page I was working on.

At the surface, I’m just enjoying the silliness of it. But some Significance has been creeping into my mind alongside the Silly. Here’s my thought: if I can accomplish with my Emotions what I’ve been doing with the toy that triggered them, I may be on my way to a more positive state of mental health.

Of course I don’t mean I’m going to teach my feelings to chomp on Christmas ornaments. I mean I might consider hanging out with them instead of trying to shove them away. Letting them become more comfortable companions, even though they’re rough to look at. I feel fondly toward this dinosaur now—and though I don’t expect to arrive at an “affectionate” attitude toward my more traumatic memories, maybe I can at least get more comfortable with their existence.

11 thoughts on “A Dash of Tobasco”