I dreamed last night that I was back in Safe Haven, the psych-facility where I recently spent ten days, and the dream felt comforting. The place is well named.

a phone with a cord… and withOUT Google!

My cell phone was one of the things I missed most in there—not for calls, but for Google (I hadn’t realized how many things-a-day I look up!) and for the camera, and for texting. This post gets doodles instead of photos, because I didn’t have my camera!

We were allowed, between group-sessions and scheduled activities, to take turns using the phone at the nurse’s station. My first day (when I was still miserably trying to claw my way out of there) I was calling my husband nearly every other hour. That’s a lot of calling for someone as phone-phobic as I am, but I was raw and out of my comfort zone and looking for the balm of his voice.

Technically, I could have announced my intention to walk out at any time—despite the lock-down conditions, I was on a voluntary hold—but I was looking for someone to tell me it was okay to go. Let me be more honest: I was  trying to manipulate the psych-doc into telling me it was okay to go. But by the fourth day, I told her I was maybe doing TOO well. She mistook my announcement for another attempt to get myself released, but I corrected her interpretation. “I’m actually afraid to go home right now. I think I’m feeling TOO good.”

For the first time, I was recognizing that “feeling-really-good” can be a symptom of the manic end of a scary bipolar swing; it’s the prelude to that other shoe dropping. It’s the warning sign that I’m probably about to hit an equally extreme low.  I wasn’t ready to be back out in the real world when that happened—I hadn’t yet figured myself out enough, and I wasn’t sure enough of the new meds.

All in all, I had made an attitudinal U-turn as I got comfortable with the place, and with my “neighbor-patients.” We were bonding and joking, and I was finding value in the group sessions at which I’d wanted to scoff a few days before.

And in contrast to the emotional all-time-low that had landed me there, I was finding joy in really small things. The arrival of coffee in the morning. The good food at mealtimes. The smoke breaks. An unexpected laugh. A newspaper brought in from Outside. My husband’s cheery “Hel-lo, Baby-Doll!” when I called him from the nurse’s station (not with the obsessive frequency of my first day). Being given a coloring-page or a crossword. Making fun (with my new friends) of the bendy-and-bossy yoga instructor in the video we used during “recreational therapy.”

I was getting medical and psychiatric care, and my real world outside was essentially “on pause.”  (As a matter of [shocking] record, that outside world even seemed to be still spinning without my management!) For ten days I got to be nothing-but-Kana, no expectations of “filling any roles”… In there, I wasn’t anybody’s employee or daughter or mother or wife or sponsee or Sunday school teacher…  Just Kana.

my name(s) by my door

The nursing staff kindly put “Kana” (which is actually part of my middle name) on the whiteboard by the door to my room, along with the first name which shows up on my medical chart, but which I don’t use now. My girlfriend Teresa commented last week that my multiple names—especially if you add in the various nicknames to which I answer—might be symbolic of the diverse variations of me…  Though (unlike my late husband, who used different names for his drinking-self and his sober-self) I don’t see my moods as separate versions; “Kana” inclusively covers all the things I am now, while those other names are more like past versions of me. Still Me, but not Me-NOW. In Safe Haven, I was only expected to be Kana, whoever she is.

(yes, I actually wrote that on the cover)

And therein lies my challenge–I find myself in the strange situation of beginning to figure out WHO that is, exactly, after the realization that my self-image is not a match with the reality. I started keeping a “lab-notebook” about myself, scribbling madly in the (way-too-girly) notebook a nurse had given me at three in the morning when I first arrived.

I tracked moods against events to notice that they don’t seem to correlate; I could be at a manic high even when my mind was bummed that a friend had just checked out and left. I realized how much I “cover” my lower moods with an appearance of cheerfulness, that “default-setting smile” and silver-lining humor.  I watched my manic-self chattering away, thinking “oh my gosh, this girl can’t shut up!”

(When I shared that one with my mom, she busted up laughing. This is not news to people who have had front-row seats to “the Kana Show” for years…)

My “neighbor-patients” helped me with the Observation Project (at my request), pitching in with observations more easily made from their viewpoints than from mine. Isaiah good-naturedly invited me to “listen to the sound of Kana NOT talking,” other people shared that I talk super-rapidly when I’m wound up, and that my laugh at those times may be louder than necessary. Armed with those observations, I can be more self-aware; the rapid-fire mouth can actually alert me to the manic nature of my mood.

a couple friends made a joke of labeling our water-cups one morning… People-connections and humor are therapeutic too!

Over the course of the week, the new medications helped to even out my moods—the highs not so high and the lows not so low.  The group sessions and interactions with psych staff and my neighbors continued to help me, and I began (without pushing for it) to look forward to being home.

I looked forward to Google. And mirrors. (Though maybe it was just as well I’d been without, given that I’d been sporting scrubs and pigtails—probably lopsided—for over a week.) I missed real pens and toothbrush (you get miniature, floppy ones on a psych ward, so you can’t hurt yourself). Shoelaces, confiscated for the same reason. (And I saw more butt-cracks during that week than I care to say—no one is allowed a drawstring or belt.)

Although hubby Jon had brought my 40-year-old teddy bear (who, like me, got strip-searched before they allowed him in) for comfort, I looked forward more than anything to snuggling into my own bed with my own husband!

My “vacation” proved to be a hiatus from the stresses and challenges and expectations of daily life; as small as those stressors might be, I hadn’t been handling them appropriately.

It’s not the vacation I would have planned for myself, but it was exactly the one I needed.  And hey, when God is your travel agent—putting you exactly where you need to be—you just don’t argue with the itinerary!

My psych-ward stay provided a much-needed course-correction… And the current, ongoing project (lab-notebook at the ready!) is to implement new meds and new eyes and new thinking in the context of my actual life. As always, this mind of mine is very much a work in progress! 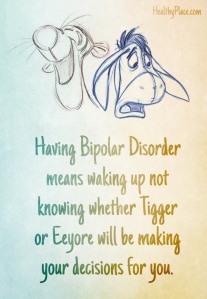 6 thoughts on “If God Acts as Travel Agent, Don’t Argue the Itinerary”